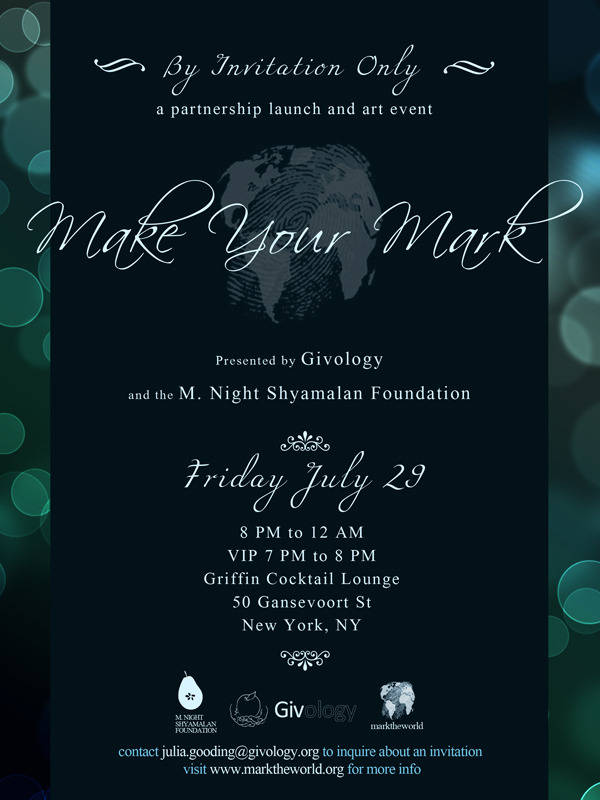 Givology and the M. Night Shyamalan Foundation (MNSF) will host “Make Your Mark on the World” on Friday, July 29th from 8PM to 12AM at Griffin, a cocktail lounge located in the Meatpacking district of Manhattan. This exclusive, invite-only event celebrates the new partnership between Givology and MNSF. Givology and MNSF will welcome MNSF co-founders M. Night and Bhavna Shyamalan, members of the Givology board, as well as partners, supporters, friends, and media.

A private VIP gathering with $75 entry will also be held from 7PM to 8PM, featuring an address by M. Night Shyamalan, cocktails, and passed hors d'oeuvres. For a limited time, VIP entry will be $50 if you RSVP by this Friday, July 22nd.

Who: Invited supporters of Givology and the M. Night Shyamalan Foundation, partners, board members, friends and media

What:
- Givology and M. Night Shyamalan Foundation Partnership Launch
- Address by M. Night Shyamalan, Oscar-nominated producer, director, and screen writer
- Auction and sale of the 30 panels from the mural created by Joseph Kilrain.
- Dozens of artworks from partners and students from around the world on display
- Video debut by The Jubilee Project

To inquire about an invitation, contact Julia Gooding at julia.gooding@givology.org.
Mention if you have a group of 4 or more for table reservations.


The “Make Your Mark on the World” Story:

The “Make Your Mark on the World” event is also the conclusion of a two-part campaign that began in June 2011, with the creation of a one-of-a-kind 6’x11’ multi-canvas mural of the world by respected graphic artist Joseph Kilrain. Givology collected more than 200 fingerprints and raised over $300 during an outdoor exhibition in Union Square. The Jubilee Project also filmed dozens of on-site interviews, in order to create a film that will debut the night of the event. The 30 panels of the mural will be sold and auctioned, with the goal of raising $20,000 in sales and donations to support Givology students and projects around the world. The event will also feature the artwork of students from all Givology partner schools around the world, highlighting artwork from students at Buen Pastor convent in Guanajuato, Mexico.

All this in one special night. RSVP for the guest list now. Space is limited.