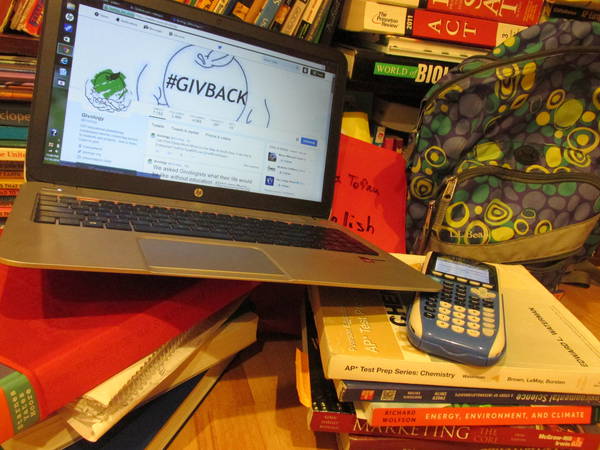 For part of my life, my family's been on the receiving end of giving, but now that I'm able to give back, this is my GivBack story. I'm the daughter of two immigrant parents who came from Romania as refugees to escape religious persecution and the oppression of communist dictatorship. When my parents first got to The United States they were really poor and struggled to make a living but a world of opportunities that they otherwise never would have been exposed to awaited them. When I was born, we lived in a small apartment for a couple of years while my mom went to nursing school and my dad worked in a factory. We later moved to a rural town in Connecticut and my brother and sister were soon born. Through our local school, the three of us have many opportunities to learn and take part in extracurricular activities, music classes, online classes, and public school partnerships with local colleges. I'm thankful for the opportunities that I have to get an education, but it's not enough when so many other children do not have the same opportunities that I do. According to UNICEF, 58 million children are currently out of school.
Three years ago, I visited my extended family in Romania and saw first-hand the lack of access to education and healthcare. The villages had no running water, no electricity, and not even one school house for children to learn in because there were too few children and there wasn't enough money available. The elementary school aged friends I made worked on the farm all day and their education was limited to what their parents passed down to them. As a child, I loved going to school and I felt bad that they couldn't go too, but I didn't understand how important education truly was. A few years later in America, I began working with local farm communities and realized that the issue was closer to home than I was previously aware of. In tobacco farms in Connecticut, many children of immigrant farmers lack access to a quality education and healthcare. Their parents make very small wages as immigrant farmers and cannot afford to buy school supplies and clothes. Seeing the lack of access to education not only globally, but also locally, made me want to make a difference. Last summer I started a book club for children in my community to promote literacy, and I centered book topics around global issues like education and gender equality. Many of the kids felt inspired by the books we read and wanted to do something to help, so we started taking on different projects to make a difference in our community. A couple of years later I found out about Givology, which helped me find the best way to volunteer and donate directly to students and projects that I want to support, no matter where they live. It became a way for me to help people beyond my immediate community and make a difference for people who needed an education the most.
As part of Givology's #GivBack campaign, for every picture of the contents of a backpack or purse posted to [url=https://www.facebook.com/Givology]Facebook[/url], [url=https://twitter.com/givology]Twitter[/url], or [url=http://instagram.com/givology]Instagram[/url] and shared with Givology, $1 will be donated to Givology students and projects. On Giving Tuesday, Givology will post a collage of all of the photos received and the total amount of money raised. Post your photo, tagged #Givback, before December 3rd to take part and support Givology. Many of us throughout the world have backpacks and purses filled with things that other people don't have access to, but just by posting a picture you can help change that.