This summer, I visited a rundown, poverty-ravaged school in a small, virtually unknown town in India.

I remember that day with a crystal-like clarity. It was about 112° Fahrenheit and all the kids were clustered together outside on the mud floor, batting away the incessant flies, wiping away the rapidly forming sweat, and probably wishing fervently for just one ceiling fan. They had tattered uniforms and pencil snubs, and the blackboards had one piece of chalk each. I thought about my own high school and its air-conditioned classrooms, the desks and chairs and whiteboards we all sometimes take for granted, and felt sick.

The teachers of the school sat me down under the one fan in the school and gave me a cool drink. They had nothing, but their Indian hospitality was still intact. They told me about the school: they received 2 rupees per child from the government (approximately 3.2 cents), they provided the students with whatever notebooks and textbooks they could find, and they cooked the students lunch every day, knowing that oftentimes these children don’t have enough to eat at home. I searched the wide brown eyes of the children, wondering how they could stand these conditions, why they faithfully attended school every day without complaining, once. The answer became apparent as I watched them hang to every word of the teacher as if everything she said was a precious gem, too valuable to escape without notice: these kids had next to nothing, but they had a desire to learn. Still, their lack of what we consider basic necessities was appalling.

The distressing truth is also borne out in statistics. India has the largest population of illiterate people, with 287 million uneducated citizens out of a total 1.2 billion. About 39% of the world’s illiterate adults are found in India. Compare this with the United States’ literacy rate of 99%, and the fact that attaining education in India has been a struggle since the 1900s, and it’s pretty obvious that this is a problem that needs critical attention. Actual stories that confirm these statistics abound. Our taxi driver in India was completely illiterate. His dad passed away when he was eight and he was immediately sent to work to support his mother and two younger brothers. He’s never even set foot inside a school. And there are countries in a far worse off situation than India.

One always hears about these people’s situations, in photographs, in magazines, on TV; but the pretty, sympathizing voice that expresses plasticky sorrow about their condition and implores you to do something about it somehow always falls flat. But when one actually sees these things with their own eyes, the perspective changes drastically. Not a day goes by that I don’t hear some whiny, ignorant fellow student at my high school complain about something, be it the homework, our teachers, or the weather (despite our functioning air-conditioners and heaters). I myself have complained many times about something or the other. Experiencing the lack of resources and the difficulties these students in India face changed my view on school completely.

Most of us living in America have won what Warren Buffet calls the ovarian lottery, implying that the fact that we are born in this country immediately entitles us to more privileges than the average person born in India or some other developing country. I think it behooves us to share our good luck and bounty with those less fortunate. Numerous studies have shown that the best way to raise the standard of life in a country is by providing better education to its citizens. The students of developing countries deserve a fair shot at getting a good education. They deserve access to teachers, books, school supplies, and technology.

Imagine if just one school in every school district in the United States adopted and fundraised for a sister school in a developing country. According to Wikipedia, there are 13,506 school districts in the country. That would uplift education for 13,506 schools around the world! That is an enormous change and will actually move the needle in making a substantial difference for children of these countries. The average elementary school in poor parts of India has about 200 students, while the average high school in America has 2,000. Just imagine: if all 2,000 students in a single school donated one dollar, they would raise enough money to buy desks, chairs, school supplies, computers, fans, and heaters. I personally believe we should all continue to search for new innovations and more effective methods of spreading the gift of education around the world.

This is exactly what Givology’s mission is, and it is also why I am so proud to be a part of it. With projects such as [url=www.givology.org/~bchildren/]Bajipura Children’s Library[/url], which works to bring relevant, child-friendly literature to students, and [url=https://www.givology.org/~tfindependence/]Training for Independence[/url], which focuses on children’s education, public rights, and employment guarantees, Givology gives me hope; maybe some day education systems in poor countries will undergo radical change. In the meantime, we will continue to diligently work to improve the lives of fellow students who do not have the same resources we do. While making a difference in the state of education in the world, we will teach the more privileged to better appreciate what they have. 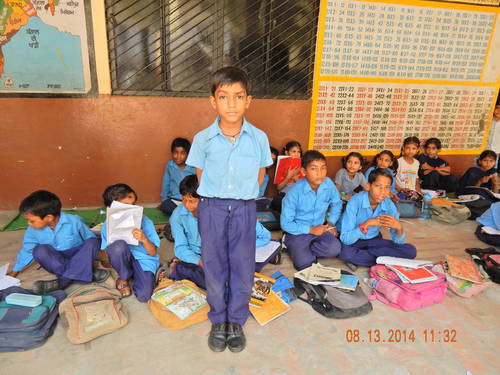