I’ve read numerous articles in the Times and the Post about the dire state of the Haitian education system namely the schools and the abandoned pupils. In my last post, I blogged about the meaning of education to these Haitian children struggling everyday to break the cycle of poverty. All the while I’ve pondered the question of how I can help in an action-oriented, deliberate way that would most effectively make an impact. Fortunately, Givology recently established a partnership with a local NGO called La Vallee Alliance, and it just so happens that the founder and inspirational leader behind this project were in town a few weeks ago near my home in Northern Virginia.

Fate has a way of making a point.

One great thing about ‘working’ for Givology is meeting new people and making new connections (shameless pandering for those of you out there thinking about volunteering for Givology). It turns out only one degree of separation stood between me and the founders of La Vallee Alliance. And it was on a crisp, clear Friday night when I attended a neighborhood fundraiser that I finally had the chance to see the work of our partner up-close and personal. 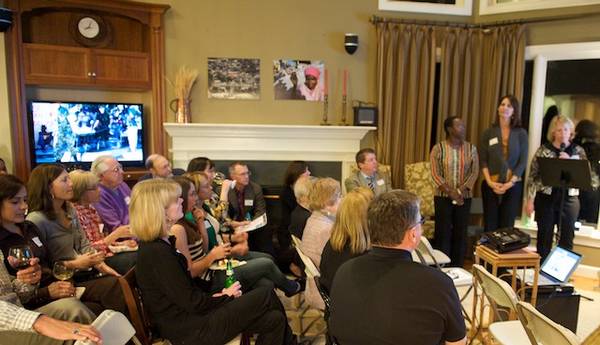 Above: crowd in living room listens to presentations at fundraiser

The story begins with Antonica, a hard-working Haitian woman who before even learning my name gave me a swift, warm embrace. She’s the inspiration behind this school reconstruction project in La Vallee, a city in the rural mountainside of Jacmel with an estimated population of 40,000, twenty percent of which are school-age children. Though she moved to the States years ago, her heart remained in her homeland. When the earthquake struck, Antonica very urgently answered her country’s call for help which in her mind translated to: help the children go back to school. She enlisted the help of her friends, neighbors, and family alike, including Anne Clougherty, whose kids she has looked after since they were toddlers.

The families’ connection runs much deeper. The stories told at the fundraiser revealed how intimately intertwined the Cloughertys’ life has become with Antonica’s and how closely the family related to her long-standing concern for Haiti, namely her passionate will to educate the local children. An individual’s cause soon became a collective cause, for which Anne along with neighbors equally touched by Antonica’s story came to support in the name of La Vallee Alliance.

Anne, who voluntarily took a trip to Haiti in the summer of 2009, has experienced up-close the trials and tribulations the children face every day of the year just to stay in school. She made the long, arduous journey to and from school with the local children in conditions unthinkable.

“I don’t know how they do it,” Anne recalls, “walking one and half hour to school every day in just flip flops, with limited access to water, on steep, rocky roads, under all the heat…” 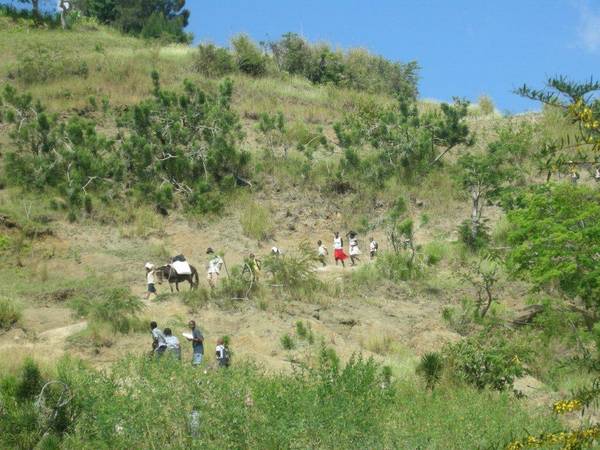 Above: children on long march to school

Anne has since sponsored 10 children in Haiti to send them back to school. However, so much work remains to be done, especially in the aftermath of the earthquake.

La Vallee Alliance was formed amidst this growing concern for the dwindling education opportunities as well as for the greater well-being of the La Vallee community. The Alliance is currently working towards fulfilling the community’s needs in four broad areas: school reconstruction, student enrollment, temporary shelter, and sustainable farming.

While the first three initiatives are intuitive, the latter one was refreshing to me, so I inquired deeper. Marcy, another founder, informed me of their plan to build self-sustaining gardens near the school to provide not only a source of food for the students but also a source of income for the school after selling the produce at the local market. Every student at the school would be required to tend to the garden. In the future, Marcy hopes the Alliance will be able to sponsor not only gardens near schools but family gardens as well.

The Alliance realizes that the children’s need for formal schooling is not isolated from the greater needs of their families and their community at large. Anne carefully reminded me during the interview that fundraising is crucial at this point, as the Alliance strives to meet the demands of a community that has experienced an influx of migrants back from Port Au Prince after the earthquake destroyed most of the urban landscape.

When asked about external support from international aid projects, the founders admit support has been limited, primarily through the church and some community coalitions, although the latter has been with a medical focus. They expressed regret that government bureaucracy and many of the better-known relief projects so far have tended to prioritize Port Au Prince above local communities like La Valle.

After learning of their lofty goals, I inquired about a more concrete plan of action. Anne responded with a cheerful air, “Everything starts now. We begin sponsoring students; we supply the schools with reconstruction materials. The gardens start right now, and the shelter is so key, and at the moment we’re still waiting on the larger NGOs to come up with a design, plan, and implementation [methods].”

Her optimism didn’t strike me as naïve but rather motivational. Although I wasn’t in the room with these women discussing the next steps of this grand project, on the other end of the telephone line, I could still sense the confidence and determination that filled the air with hope and promise. Their triumph lies not just in their mission statement but in their relentless desire to do more than just make a $5 donation on their mobile phones; and this may start with growing a garden, or more simply put, with the planting of a seed.

My Tuesday Conversation with Joanita